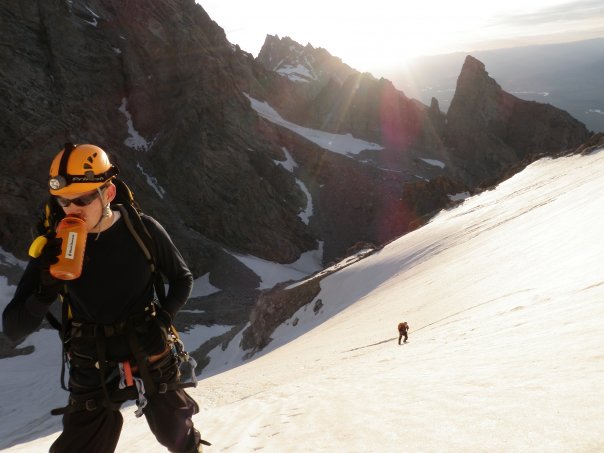 There are plenty of times that I have had buyer's remorse.  For example, there was this one time my wife and I got Indian take-out.  I love spicy food, but this time I asked them to make it super spicy.  It was SO good; so good, in fact, that I couldn't stop eating.  I ate so much that I had a stomach ache and spent the whole night laying on the couch, barely able to move.  Then, I spent the whole next morning in the bathroom dealing with the second half of the double-dragon effect (burns going in and coming out).  What I would've done to get the last 12 hours of my life and my money back.

Then there was this time that I signed up for the High Uinta Classic, an 80-mile bike race that goes through and over the Uinta Mountains of Utah.  Everything was going great until we got a surprise snowstorm at 10,000 ft.  20 minutes later I found myself in the back of an ambulance, cuddling with eight other hypothermic guys wearing spandex.  Yeah, I wanted my money back on that one too.

And then there was this time when I decided to check steepandcheap, saw an ice climbing backpack (or that watch or the jacket) that I knew I didn't need nor really want, but bought it anyway because the price was SO good that I couldn't pass it up (we've all been there).  I got my money back on that one, luckily, but it took three month of advertising online until I found a taker.  I lost out on $7 shipping to the buyer.

I have learned that there are times when you just have to accept that $60 bought you 45 minutes of cuddling with eight other guys, suppress it from your memory, and move on.  But I have also learned that I can usually avoid buyers remorse with outdoor gear when I do these three things:

First, do lots of research.  It drives my wife crazy at times, but if I'm in the market for a new piece of gear, I do a lot of research.  I'll make a list on excel with as many different products from all different brands in that category of gear and compare their weights, materials, prices, construction techniques, etc.  I even compare where seams are and how many seams there are, when it comes to clothing.

Second, I read as many reviews on the product as I can find.  On many occasions, I have found that other people will like or dislike a product for reasons I hadn't previously considered.

Third, I try the piece on in a store to see how it fits and what the jacket really looks like.  If I can't find a place that has it, I will find a good deal online from a place that will allow me to ship it back if it's not quite what I was looking for.

Finally, I shop around.  I love getting a deal.  There are few things better than getting exactly what you want for a good price.

Some things that have caused me to feel buyer's remorse:

At times I have decided to skimp on what I REALLY wanted for a lesser product to save money.  This has caused buyer's remorse.  I usually eventually end up getting what I really wanted in the first place and have to try sell the old, cheaper product.

On the other hand, I have rarely regretted paying more for the RIGHT piece of gear.  In the long run, the higher-quality product has saved me money because I replace it half as often as the cheap stuff and I'm happier while using it.


With all that in mind, I'd like to tell you about a couple of my all-time favorite jackets that have never given me buyer's remorse for paying full price, and I would buy them again without much hesitation.  Those will be posted in a couple hours.  Stay tuned. . .